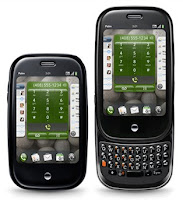 I'm a Palm fan. I have been using Palm products for 12 years, starting with a Palm III, moving to a Palm Tungsten T3, then Lifedrive, then TX, and currently using a Palm Centro on Verizon. I've always thought that Palm had the best PIM (Personal Information Management - calendar, tasks, memos, and contacts) system of any PDA or smart phone. I use my Centro for everything - Calendar, Contacts, Memos (over 1600), Tasks, email, web browsing, text messaging, games, productivity, lesson plans, and even as a phone.
I've been anxiously awaiting the Palm Pre. Palm announced their new smart phone back in January. The phone has a new operating system (webOS) and a great form factor (touchscreen with a slide down QWERTY keyboard). The applications and operating system look great and all the industry analysts are calling the Pre an "iPhone killer".
The problem - it still hasn't been released and I'm dying to get one. It will be released on Sprint for the first 6 months, and then go to other carriers after that. Palm has announced that it will be released in the first half of 2009. There are indications that the release is imminent. There are commercials being filmed, reports of Sprint employees being trained on it, and reports of Pre shipments being sent out to stores.
I'm hoping it will be out soon. I love the idea of a smart phone as an educational tool, and I think that the Pre will be a great educational tool.
For more info: www.palm.com and www.sprint.com
Disclaimer - I do own Palm stock.
David Andrade at 2:07 PM
Share
‹
›
Home
View web version