Operating Systems and Web Based Apps 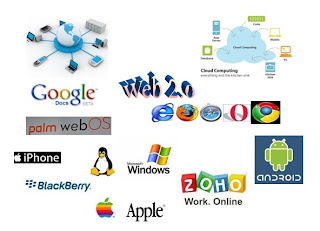 (cross posted at http://www.techlearning.com/blogs/21132)
Operating systems - this is the part of the computer that allows you to run software. Microsoft Windows and Apple OS are the two major operating systems out there. There is also Linux, which is an open source project with many varieties.
Most schools use Windows or Apple, and sometimes have both depending on the use. Apple was always thought of as the operating system to use for music and art, but it has gotten used more widely over the years. The iPhone has helped push Apple's OS out to more people.
Google has also release it's own operating system, Android, for use on smart phones and netbooks. Netbooks are small laptops that are mainly used by travelers to do email and web browsing.
Palm has just released it's new operating system, WebOS, on it's new smart phone, the Palm Pre. Palm has announced that this new operarting system will be used on many more devices and the industry rumors are pointing to a WebOS powered netbook in the near future.
I have just listed 5 different operating systems that currently run, or will soon run, on computers. This means that schools have to worry about compatability and interoperability among school computers and home computers used by faculty and students.
There are many ways to make this less painful. There has been a big push in the computer industry to standardize certain software formats, such as word processing, spreadsheets, and presentations, so that anyone can open a file, no matter what operating system they have. Apple also has versions of Microsoft Word, Excel, and Powerpoint that can read and edit the Windows versions, and Linux has OpenOffice, which can also read Windows and Apple file formats, and Apple has it's own iWorks.
Another push in the computer industry looks to eliminate the operating system as an issue. Cloud computing has been a major topic for years, but more and more companies are pushing it as a way to avoid operating system issues. Cloud computing is simply having all of your files and software hosted on a network somewhere. This means that all you need to acces the files and programs is a web browser. These systems work with any web browser. The system does not care what operating system you are using. You can use Windows, or Apple, or Linux. If you can get to the internet, you can get to your files and applications. Most people have already used a cloud system when they check their email with a web mail system. Cable, Verizon, AOL, Gmail, and Yahoo are all web based email systems that you can accces from any computer with a web browser.
The most popular cloud system is Google Apps. With Google Apps, you can create, edit, save, store, and share documents, spreadsheets, and presentations. You could work on the file on an Apple computer at work, and then continue working on it on a Windows computer at home. There are other cloud systems out there, such as Zoho and Evernote. Many more companies are developing web apps so that they can have users from any operating system.
Schools should look into more cloud or web based applications in the future to eliminate the issues of compatibility between operating systems. Most web based applications offer offline applications that can run even without an internet connection as well as a way to save your files to your own computer. The other benefit is that most of these systems are low cost or even free.
As the operating system wars heat up with Windows 7, Apple Snow Leopard and Ubuntu Linux, schools need to make sure that no matter what OS their faculty and students use at home, they can access files and applications at school and home. It also helps avoid the issue of "I forgot my assignment file at home," or "my printer ran out of ink." By using the web apps, students could just log into their account at school and print it out. Teachers would also always have their files available to them no matter where they are. In many cases, these new web applications will also save on licensing fees since they are free.
Web based applications and files can also be accessed from smart phones like the iPhone, Palm Pre, Blackberry, and G1. This means that you would have access to your files and applications at any time.
There is a lot of information out there on cloud computing and web applications. Take a look at a couple of these:
http://www.google.com/educators/tools.html
http://www.zoho.com/
http://moodle.org/
http://www.labnol.org/internet/most-useful-web-applications/6278/
http://www.smashingapps.com/2008/07/11/21-online-free-web-based-applications-that-you-probably-would-love-to-use-every-day.html
http://nedwolf.com/Web-Applications.htm
http://www.techlearning.com/article/7902
http://www.techlearning.com/Blogs/18764
http://www.techlearning.com/Blogs/18598
http://www.techlearning.com/blogs/20444
http://en.wikipedia.org/wiki/Web_application
http://en.wikipedia.org/wiki/Cloud_computing
Posted by David Andrade at 1:56 PM