Apple iPad - is it a game changer? 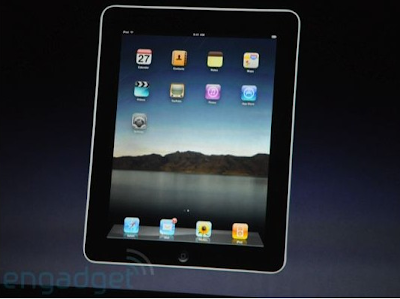 (images from Engadget)
Apple just announced their long awaited and anticipated tablet/slate, the iPad. Steve Jobs described it as something between a smart phone and a laptop.
It is really an over sized iPhone. It runs the same operating system and can use the same applications. iPhone apps look a little weird on it, but they are releasing a software developers kit so that developers can modify their applications for the iPad.
This device has been heralded as a "game changer" by many in the technology, and education sectors. It is a very cool device, but I don't know that it is the game changer they expected.
Like the iPhone, the iPad is a thin tablet. It even has the center button like an iPhone. It is 1/2" thick, weighs 1.5 pounds and has a 9.7" (diag) screen. The screen is multi-touch and capacitive. Memory comes in 16GB, 32GB or 64GB (flash memory). It has Bluetooth and WiFi also. Apple states that the battery lasts 10 hours with a month of standby. My guess this is a combination of a new chip from Apple and the fact that the operating system does not multi-task.
There will be support for 3G wireless in some models too. They have a special deal with AT&T with lower prices and prepaid (no contracts). The GSM will be unlocked also.
I was surprised that there is no camera on it. I would think a forward facing camera would be good for video conferencing.
That's right, no mention of multi-tasking on the iPad. For me, this is not good. It also has a virtual keyboard only. These two things make this less of a productive or educational tool. I can't imagine a student doing research and creating content and projects on a device that doesn't multi-task. Every time they left an app, it would close. It would also be difficult to do much typing on a virtual keyboard that is flush with the screen instead of tilted. I think that a laptop is still a much better educational tool than this.
Now, if they have an app that can use a special stylus and allow students to take handwritten notes in a digital pad, that might be useful for some.
There is a Bluetooth keyboard with a stand to support the iPad at a nice angle, which would make it better for productivity and educational uses. No word on price or availability. 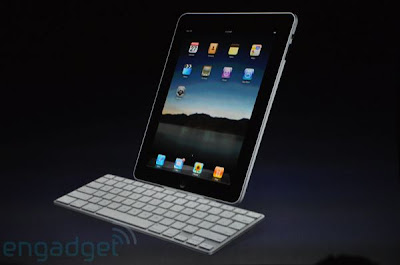 UPDATE 12/10/2010
Since the launch, Apple has sold millions of iPads. I've used a few that friends have, and while it is a fun device, I stand by my original thoughts. It is lacking for education. Still expensive compared to netbooks, no real keyboard (except as pay for accessory), no Flash support (a huge number of educational sites and sites used by teachers use Flash), not enough free apps. All contribute to the fact that it is not my choice for education. I think that netbooks using Google Chrome OS will be a better choice. Inexpensive, real keyboard, Flash support, tons of free apps, everything stored and sync'd in the cloud, and easy to use.

I know that Apple fans love their devices, but Apple is expensive and a closed system. I like inexpensive or free, open systems better.

Posted by David Andrade at 1:40 PM