An analysis of Palm webOS vs. iPhone 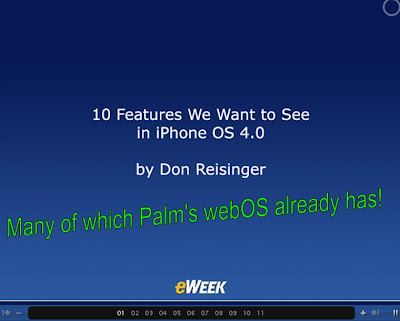 I just read an interesting feature on eWeek's website, 10 Features We Want to See in iPhone OS 4.0. They argue that while the iPhone is a great device, it is missing a few things. What really got my attention was that Palm's webOS on the Pre and Pixi have 6 of them and will have a 7th shortly (and has 2 that are very close to what they are looking for). Here's the list and which one's webOS has.

1. Multi-tasking - webOS has this. In fact, the slideshow has a Palm Pre as the picture for this slide.

2. Gaming integration - while webOS doesn't have a formal game system integrated, there are many excellent games, including 3D games, and developers have ported games from other systems into webOS.
3. Flash support in the browser - webOS 1.4 has support for this and Adobe will be releasing Flash for webOS in the next month or so. Apple says it is a security risk, but thousands of web sites use Flash so not having it limits the usefulness of the iPhone for web browsing.
4. User control - users can delete pre-installed apps (I've already deleted a couple). There is plenty of user control and customization available in webOS. The iPhone does not give you much control.
5. Improved File Management - neither system has a true file manager on the device, but there is a homebrew file manager for webOS. There is talk of a full file manager coming. webOS also allows you to use your Pre/Pixi as a USB drive, so any computer can act as a file manager for it.
6. Improved mail - the built in mail client for webOS is much better than the iPhone's, and there are some other mail clients available for webOS.
7. Built-in Social Networking - Palm has an official Facebook app that comes installed on the phones, and there are other social networking apps available for Facebook, Twitter, and Myspace.
8. Power Scheduling - webOS makes it very easy to turn Wifi, Bluetooth, or even your cellular radio off. There are also ways to schedule the radios to be on or off based on time of day. The newest release of webOS (v 1.4) has better automatic power management also.
9. iBooks - webOS does have some eReaders for it, but nothing like the one being developed for the iPad. Apple wins this one.
10. An improved App Store - webOS's App Catalog is easy to navigate and search, has different ways of browsing, and you can browse through the whole thing via the online App Gallery. Plus, Palm allows developers to offer home brew apps and apps via a web page instead of through the official App Catalog. All of these can be easy searched at PreCentral's App Gallery. Apple does have more apps for the iPhone (140K), but webOS has only been out since June 2009, and more apps are released every day. Yes, I would love to have some of the apps that are on the iPhone, but I love the webOS user interface and functions. And, most of what I do is online anyway.
Summary:
webOS has: 1, 4, 6, 7, 8, 10
webOS will have shortly: 3
webOS has a version of/kind of has: 2, 5 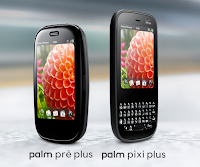 In conclusion, Palm's webOS has many great features that even the iPhone lacks. Palm just released webOS 1.4 last week. I can't wait to see what webOS 2.0 will have! Palm's webOS is a great platform that is easy to use, has a great user interface, great apps and functionality, and is easy to develop for. Look for more webOS devices in the future.
More information on webOS and Palm Pre and Palm Pixi
http://www.palm.com/us/
http://www.precentral.net/
http://educationaltechnologyguy.blogspot.com/2010/02/review-palm-pre-and-pixi.html
Palm's webOS and Pre and Pixi are great for teachers and students too! Check out the article below for more on this. (and there have been many new apps since that article was written).
http://educationaltechnologyguy.blogspot.com/2009/12/palm-apps-for-education.html
Posted by David Andrade at 12:20 PM