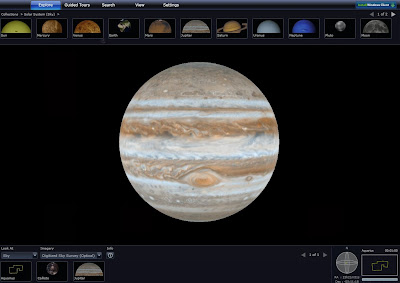 Microsoft Research has created Worldwide Telescope.
WorldWide Telescope (WWT) enables your computer to function as a virtual telescope, bringing together imagery from the best ground and space-based telescopes in the world. Experience narrated guided tours from astronomers and educators featuring interestingplaces in the sky.
A web-based version of WorldWide Telescope is also available. This version enables seamless, guided explorations of the universe from within a web browser on PC and Intel Mac OS X by using the power of Microsoft Silverlight 3.0.
Note: The web-based version will ask for more local storage (about 40MB), but that shouldn't be a problem for anyone.
You can just explore the skies by location, constellations, planets, stars, and more. You can select from digitized skies, ultra-violet, and more. You can even look at earth!
There are also guided tours available. These were set up by astronomers and researchers and are very well designed and informative. The guided tours include galaxies, planets, stars, Apollo missions, Mars missions, and much more.
The earth at night view is great to use to show students where the most lighted areas are. The United States and Europe are the brightest areas at night (Japan is pretty bright too).
I had way too much fun playing with this today. I think that this would be a great resource for science classes to show our solar system and galaxy.
Posted by David Andrade at 9:00 AM