My History with Technology - amazing how it's changed

I was looking through some things this weekend and found a picture of the first computer we ever owned at home - a Radio Shack Tandy Color Computer. It got me thinking about how fast and how much technology has changed and how the future will be incredible.

The first computer I ever used as a TRS-80 computer in 7th grade math class (1982). It was monochrome with text only and a 5.25" floppy drive (along with a cassette drive). There were some great math and critical thinking games on it and students would be able to use it if they finished classwork or as a reward. My father brought home a DEC terminal from his job when working on his Master's in Chemistry, which was very cool to see a computer connect to another. Then, we got the Color Computer, which connected to your TV or a color monitor and had cassettes and cartridges. The graphics were minimal, but the word processor wasn't bad and there were some fun games. Plus, you could program in BASIC. I even used it as part of a science fair project on computers and their future applications.

Around this time, a friend of mine's father wrote a short screenplay about Star Wars, called Return to Hoth, that took place after Empire Strikes back. We were the actors and we made models and turned their basement into an ice cave. It was an amazing process. We had a computer engineer who helped create some effects and computer effects for the space craft and it's amazing looking back now on how basic the effects were, but how much it took to create them back then. (I'm working to upload the movie to YouTube but the quality needs to be enhanced a little after 3 decades).

In high school we had Apple IIe's and I took a BASIC programming class. In college, it was all PCs, starting with 8086 processors. I worked part time in my department's (mechanical engineering) computer lab and I remember how cool it was when we got the 286 processor computers. We used WordPerfect, Lotus 1-2-3, and CADKey computer aided design software. Some of my friends had their own computers, but not many, and it was interesting to see how they had to keep swapping floppy discs to run some software. We all had email and used the internet for email, newsgroups, and FTP, but it was minimal unless you were a computer science major. I remember how you'd print out something and then have to go pick it up from the print room. I keep thinking how cool it would have been to have a laptop and smartphone back in college.

After college, I worked as an engineer for ten years before becoming an educator. I always used a Windows computer (3, 95, and onward) for a majority of my work. I still remember, in 1995, starting to use the internet and how it seemed so cool, but the business applications were still limited. Then it exploded and the internet became a very important resource for us. I did use a UNIX workstation while at Sikorsky for the CAD system they used (CATIA).

My first computer that I bought myself was a Pentium II Gateway PC that cost over $2,000. It had a small hard drive, modem, and a Zip drive. I still remember how slow it was and how slow the internet was on a dial up connection. I also remember the day I got Cable Broadband at my home (I was one of the first in the area to sign up). It was amazing how fast it was and it was so cool to not have to wait for it to connect.

Since then, I've only bought laptops. I've gone from a Pentium III to my current Core i5 and CR-48. My current smartphone (Palm Pre+) has more power than my original computers. It's amazing how far, and how fast we've come. And, as computers get more powerful, it makes it easier and faster to develop even better computers, and so on.

I was also thinking about cell phones, PDA's and smartphones. My first cell phone was a Motorola Flip, then StarTac, then a couple other ones, then a Palm Centro, and now a Palm Pre+. The first cell phone I used was a big one with a pack that I used when I worked part time doing deliveries in college. The early cell phones could make calls. Period. Then we could store contacts, then play games, and then really slow, poor internet browsing, and now they can do almost anything. My first PDA was a Palm IIIxe with a 16MHz processor, monochrome display, and 8MB of memory. I then moved on to a Palm T3, Lifedrive and then TX. It was great because the T3 onward could view and edit Office files, along with keeping track of your data. The TX and Lifedrive even had WiFi. Then I switched to the Palm Centro, combining my cellphone and PDA into one.

My students are still shocked when I mention what I had as technology and how much and how fast things have changed. From the days of playing basic games and writing very simple BASIC programs in 7th and 8th grade, to the incredible Web 2.0 resources of today, computers and educational resources have changed dramatically. Basic word processing and text based spreadsheets to interactive, online resources and apps. Slow, bulky, minimal application desktops to do-everything smartphones. It's amazing.

What are your memories of your early experiences with technology?


Here's an image with some of my computers, PDA's and cell phones: 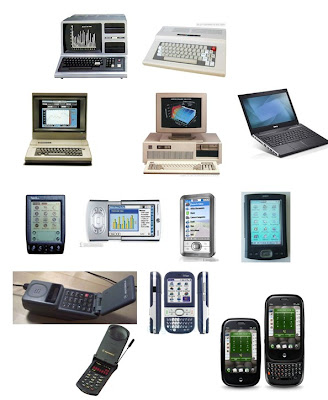