Google+, Google's social network, is now open for teens. I've been using it for quite a while and really like it. You can post more that on Twitter, have great conversations, have video conferencing, easily choose who to share posts with , and you don't have all the bloat and apps that Facebook has.

Google has changed the age requirements for Google+ so that any Google Account user can join. That means it is now open to anyone 13 years or older.

Google has set some default settings for teens to increase safety and privacy, including setting it so that only people in the teens circles can send notifications and comment on posts. It also sets it so that if a teen has a hangout going and someone outside their circles joins the hangout, the teen will be removed but given a chance to rejoin. This gives them a chance to make sure the new, unknown person is safe to have in the hangout and wanted. 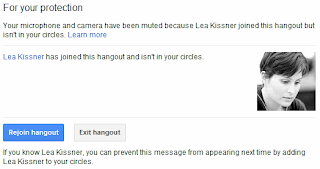 Posted by David Andrade at 8:44 AM