All of your musics, movies, books and apps are stored online, always available on any device through Google Play. Google Play stats:


Store up to 20,000 songs for free and buy millions of new tracks
Download more than 450,000 Android apps and games
Browse the world’s largest selection of eBooks
Rent thousands of your favorite movies, including new releases and HD titles

The move starts today and the Android Market will get upgraded on Android Phones and Tablets over the next few days. Video, books and music apps will be upgraded to Google Play Movies, Google Play Books and Google Play Music apps. The music, movies, books and apps you’ve purchased will continue to be available to you through Google Play.

Google is also going to have some special prices for albums, books, video rentals and apps over the next week.


For teachers, students and schools using Google and Android, this is important information. It brings all of these different media types into one location. 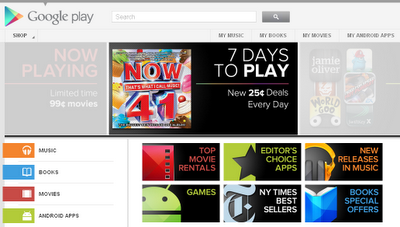 
(on a side note, I love the interactive logo circles on the Official Google Blog).

Posted by David Andrade at 1:38 PM